I just never was the DPS sort.  I mean, I’ve played the class enough times, but a great amount of DPS’ers really just feel they bring one of two things to the table–either DoT hurting or burst hurting.  You can color and cover it any way you want, but a Scrapper is a Ninja is a Thief is a Necromancer.

Tanking, however, feels different to me.  More vital.  More nuanced. 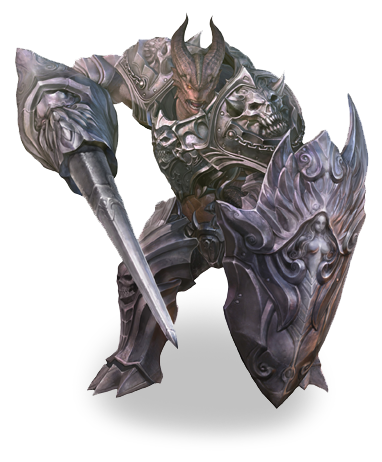 …well, as nuanced as one can be while being a giant monster dude with a huge spear.

Sure, one can certainly argue that tanking is even more one-note than DPS.  You taunt things, you herd things and that’s sort of about it.  Still, I enjoy doing that stuff…and it really is perhaps a lot more involved than most people think.

For one, you’re the leader of the group, for better or worse.  Sure, you’ve got some DPS players who charge into enemy mobs, and you’re at the mercy of the healer’s skills to carry you to success or failure…but you still are the lynchpin for the whole run.  Nobody should make a move unless you do.  Nobody can really command how content operates like the tank…and tankers can adapt around what’s happening to meet pace with the group.  I would be lying if I didn’t say I thrive in that sort of environment.

Secondly, I just feel more empowered when I’m in a tanker’s armor.  DPS are without doubt empowering in the sort of damage they dish out, sure…but I have always been a fan of winning by attrition rather than winning because I cut things in to ribbons.  I love that I can run face-first into the fist of a big ass rock golem, take the punch in the mouth, and smirk at him and say “I hope you’ve got better than that.”

Also, we have neater clothes.

In the age of the instant party finder, having to wait for a party run as a DPS is the sort of hell that reminds me too damned much of Final Fantasy Xi…which I just can’t bother myself with anymore with the way my life operates.  Tankers are always in demand in MMOs…and while I hardly would consider myself to be a great tanker, I like to think that I’m worth the wait…or at the very least, I try to be.

I don’t particularly expect to be thanked.  In fact, tanking is about as thankless as it gets in many MMOs, though arguably not as thankless as a DPS’er.  All the same, I don’t really expect any grand praise or reward for my chosen digital vocation.  I just really like being the sort that people need to depend on.

My favorite letters in MMO gaming are “LFM”

Obviously, like any job or class, we tankers are not without our faults.  I sure as hell am not.  For example, I have bitten off more than I can chew on a number of occasions. I also have something of a documented casual playstyle, and so if I fall behind on the greater progression meta, I can be left at a pretty serious disadvantage in holding threat.  And then, of course, there are the moments when I just sort of forget my rotation or miss a skill.  Sure, that’s sometimes not entirely my fault, but that doesn’t mean I don’t shoulder the blame.

Speaking on a more personal level, I tend to take my leadership role perhaps a bit too close to the vest.  If something goes terribly wrong with an encounter and I’m the one to blame, I feel absolutely, honestly, physically ill.  Especially if the failures happen multiple times.  The Odin encounter in Final Fantasy XIV is a prime example–this instance requires a Paladin in specific to be successful, and demands that you are on point with activating cooldowns and avoiding the fire.  It is probably one of the single hardest things I’ve done in the game…and while I’ve cleared it on more than a few times just thinking about the encounter gets my heartrate up.  And not in the “Oh boy I get to eat chicken wings soon!” kinda way.

Despite those pitfalls, though, I adore being the tanker.  I tend to gravitate to the classes that let me face the brunt of an enemy’s might and just slowly whittle them away.  Not a whole lot of DPS classes made me feel a lot like I was able to weather a storm.

Where a DPS is the eye of the hurricane, the tanker is the palm tree swaying against the wind, letting itself feel the breeze.

While everyone else is dying around me, I’m enjoying the cool sound effect of that conal attack.