I had done a “Through Wolfy’s Eyes” write-up of WildStar as one of my first entries–something of a “signature” way of me writing a review that I tried to tie specifically with my blog.  However, I do intend to create new write-ups for MMO’s, especially since they are always changing.

That said, there was one part of WildStar that really deserves its own blog post. And that part is its housing.  It’s not only one of the signature features that this game has gotten correct right from the very start, but it has been a repeated source of both delight and frustration for me. 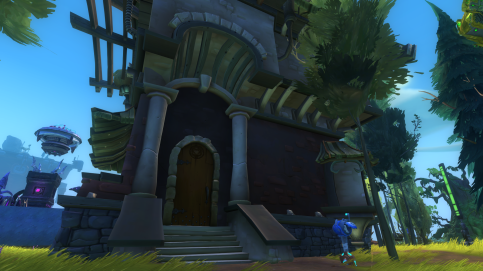 Ownership in an MMO is POWERFUL, people.

Like a great many of the systems in the game, WildStar’s housing sounded pretty damned amazing on paper: a wholly customizable, empty parcel of land that you could build upon with a variety of easy to manipulate tools to provide a unique piece of in-game real estate as well as provide buffs and bonuses to your character.  Unlike some of the systems in the game, though, it delivered on its stated promises.  When I finally had the right level to get my own Skyplot, the reality of the situation was even better than I had expected.

The first sensation I had when I phased in to my new piece of land was awe.  It was basically a long pause of just looking at the little expanse of land and just thinking “..awesome!  But…uh…now what?  What can I do?”

So I fiddled around and started plunking down things.  First it was the premade stuff that I arranged in what I had hoped was a reasonably sensible order.  Then I started playing around with the building tools.  I spun, sized, tweaked, tried to line up, got angry at how it wouldn’t line up, tried again, realized there was a copy tool, realized the copy tool was really bad.

After a time, I put together my character’s own laboratory area.  A place for him to do his scientific thing, as he’s a nurse who likes to develop medicines and salves that can be loaded into his pistols, aerated and fired to benefit others.  It was a character quirk that extended beyond just something I wrote down in a journal or a Wiki page.  This was manifested in the freaking game.

Almost shortly after, however, I was shown at how not-amazing at this whole system I truly was.  For all the pride I felt in my little Aurin’s laboratory area, there were myriad others who were able to put together SO MUCH MORE.  It lit my imagination on fire.  It made my jaw drop.  And it actually made me pretty angry.

See, nothing is worse for a creative type of person to have a clear vision in your head not manifest itself correctly or as you see it in your mind’s eye.  It is failure that stings your eyes and your feelings.  You put forward effort and time and energy only to see it just look at you, wag its tail and go “Derp.”

So it was with other people’s housing plots.  In specific, there’s one person by the name of Kelzam Duskthorn whose work rises beyond all others.  He makes what looks like simple tools capable of creating freaking worlds in that little housing plot.  And he’s not alone.  Apparently, he is part of a cabal of creative vampires who all gather together, feeding arcane creation energy to each other to create staggering set pieces, as the below video will demonstrate.

Look at that.  Freakin’ LOOK AT THAT SHIT.  I mean, come ON.  That doesn’t seem fair.  Or possible.  But it is.  There it bloody well is, winking you at the face, sparkling like a damned yaoi character.  I wanna kiss it, it’s so pretty.  Bastards.  And that’s part of my aggression here.  I know you can’t “win” at housing, but falling short of vision hurts.  It really does hurt.

But then, if you think about it, this same lesson was handed to me in Landmark.  We can’t all be genius builders, and not every Skyplot can be a damned palace.

Though nobody can build a pillow pile quite like me.

As simple as my plot was, it was mine.  I made it, and it was mine, and it fit my character.  And I still truly believe that I can learn and improve.  Sure, I can’t stand up to the creations in that video up there, but I can at least make something that will fit.  That will match my ideas and be worth the effort.

I can always learn.  Either by doing or watching videos of how its done or reading guides…but it can be always changed at any time.  I can even clear the board of its pieces and try again and make it better.  Which I am going to do with my Aurin as well as with my Draken.  For my Aurin, he will get the laboratory and the R&D and medical place he deserves.  For my Draken, she will get her spaceport and louge retreat, a place for her to display her discoveries and collected curiosities and valuables.

I suck at this.  But I sure as hell am going to try.  Because dammit, this is still fun.  It’s still something that has as much character as my characters do.  And it is the best around.

1 thought on “Blaugust Day 11 – A Skyplot Full of Dreams”