My husband began his Pokemon’ing around age 11 or 12 or so.  Blue was his first edition, and after that it was Gold and Silver, then online emulators of Ruby and Sapphire.  Currently, he’s pretty much face-deep in to Omega Ruby.  At the time of this blog, he’s got about 52 hours sunk in and is heading to the Elite battles.

I have no idea what that means, but 52 hours and Elite?  Sounds pretty promising. 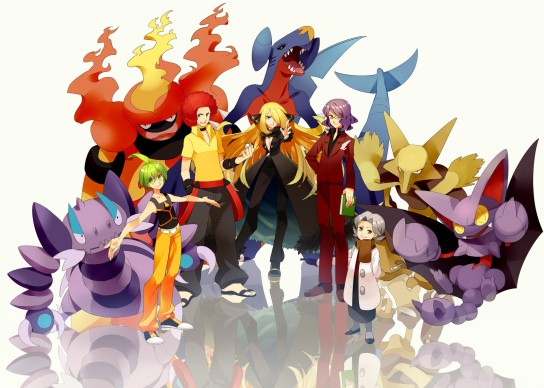 So who better to pick the brain of than him?  I mean, I don’t know any other Pokemon fans in my personal life…so I ask him a few questions.

“What is it about Pokemon that drew you in so much?”
The cartoon was his entry drug.  He picked up the game afterwards and was embroiled in to the thing ever since.  His brother’s own fandom enhanced his experience, where there were friends over, guidebooks, battles, trades–a whole social experience.

…hearing about all that, that really all sounds like a great deal of fun.

“Do you feel like that social experience is gone with online connectivity?”
Sort of, he believes.  Granted, he played on emulators which didn’t involve any connection, but his formative years were fully involved in the physical connection–being in a room with other fans, trading, fighting, reading and just enjoying.  Nowadays, he feels, the game has lost a bit of that in lieu of having competition-level loadouts and strategies far deeper than what would be considered “for funsies.”

That said, being online and playing with friends directly is as close to replicating those early years as he can get…and that’s his preferred methods of play.  For example, a friend of his is collecting a themed type of Pokemon to make himself his own gym leader, and beating him meant you got a shiny from him.

…heh, that is REALLY clever.

I wonder if his friend also dressed up for the role.

“What would you say is the best way to get in to this whole thing?”
Go in it with an open mind, as he puts it, and experience it.  Having friends nearby helps, but it’s your individual personality that makes the game what it is.  Ignore mistakes.  Experience.  Play.  Have fun.  Ultimately, the game shouldn’t be taken as anything more than fun.

And having watched the game played, I have to admit that it does seem to hit some notes for me.  It’s the old-school RPG battle system from a Final Fantasy or Dragon Quest with adorable (most times) critter-things.

Speaking for myself, there’s also some sort of hypnotic quality to trying to capture the titular monsters.  I had played Pokemon Snap just as a giggle to affirm to myself how utterly stupid the whole thing was, and I found myself wanting to snap better pictures and find more of the creatures.

And I think that’s kind of what this game is for people, speaking from an outsider’s perspective.  It’s an RPG.  Or it’s a competitive sport.  Or it’s a social experience.  Or it’s a Pokedex that must be filled with every name because you’re a completionist.

But regardless of how one plays it, it’s fun.  Which is something that will always transcend age and years.