I play multiple MMO's not because they all fail at something, but because I choose to live unique lives and explore multiple worlds.

This rather declarative tweet is the brainchild for this whole post.  It’ll probably be a bit short, to be honest, but it’s essentially a call to anyone else who feels this way. Or perhaps it’s more a pat on the shoulder to let those who maybe feel like they’re “doing it wrong” know that no, you’re doing it right.

I have at least three MMO’s in my regular rotation, with about three or four others on standby just in case I get the weird need to hop back in.  As of this writing, XIV, Blade and Soul and WildStar to a lesser degree are part of my cycle, but I’ve been side-eyeing The Secret World awfully hard recently, I find myself wanting to re-enter Elder Scrolls Online and games like Star Citizen, Elite: Dangerous, The Old Republic and The Division all beckon once in a while.  Or at least give me the puppy face.

This sounds like a lot of things on the surface–a person who just bunny-hops games, a person with more time on their hands than sense, a person who has the attention span of a mosquito. I get that, really. Honestly, though, I play these games errantly because I enjoy the option to be within any given universe at any given time.

I’ve stated before that I love roleplay, and that it’s definitely the sort of activity that’s the most social in MMO’s…but really, if I can feel like I’ve made a character that lives in the world even without being personally acknowledged by others, then I can be satisfied. Sure, there are characters whom I would love to have adventures with others with, but headcanon can be fun as well. My Blade and Soul character, for instance, doesn’t really have any sort of deep characterizations or motivations, but she appeals to me because I feel like she’s the protagonist of a silly yet violent romp through the game’s world. I envision her giggling as an enemy hits her decoy instead of her, then viciously kicking them in the air to slash them in to ribbons.

Also, the games I play are pretty divergent from each other, meaning new experiences come around on any given night I decide to fire up any given launcher.  Some days I’m just building a house in WildStar, envisioning others using the space. Or I’m helping people do some farming in XIV or being an armorsmith for someone’s character. Or I’m watching people fight near a village in Blade and Soul and egging them on. I wear a lot of different shoes, and they all have their purpose, like a lady’s selection of party heels.

Some are definitely more comfortable than others.

Would I prefer that one game provide all these needs for me?  Sure, I wouldn’t say no.  But then, I also understand that eating the same dish isn’t always the same dish if different chefs cook it. How many variants of a French toast or a pancake have you eaten? How neat is it to have so many varieties? Pretty much a similar mindset here. I love pancakes but love when people come up with different ways to make them. An MMO can be a lot like pancakes in that there are a whole slew of unique ways it can be interpreted that it’s hard for me to settle on just one flavor. Vive le difference.

…I apologize to Ysharros in advance for misspelling that or not putting in the right accent marks. I suck at that.

MMO’ing being an activity that multiple people enjoy, you’d certainly think that my rotation of games would mean I don’t make connections. Nothing could be further from the truth. In fact, I’ll stick with a game I don’t like very much precisely because I’ve found lovely people.  XIV is fast becoming a bore to me of recent, and a source of frustration as far as progression matters and playstyle goes….but my sub stays up because I am in a lovely Free Company and know some incredibly wonderful people. My character is kind of tied to some of those folks, and I don’t wanna lose that.

Hell, even games I don’t play very much now I’m firing up for because wonderful humans are also playing them.  Chestnut and Fitch in WildStar,  Otterdown and Gryph in The Secret World. These are folks who energize me to try again in games that maybe are falling to the back. That remind me of the lovely parts of those games. And that I kinda miss the shoes those characters wear. 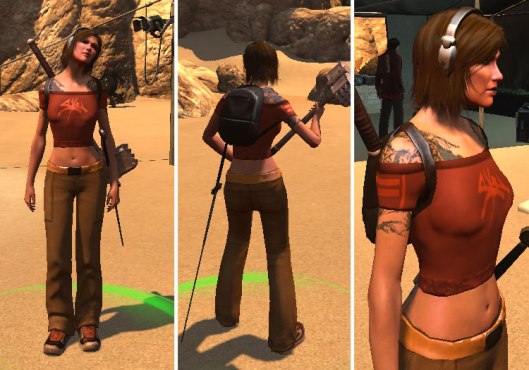 Along with the rest of the outfits, for that matter.

Perhaps spreading things around multiple titles is a bad thing for MMO’ing. Perhaps the MMO itself is not what it once was. Perhaps I’m part of the problem and am thus a horrible monster. But I don’t see it that way.  I see it was accepting the idea that the MMO is an evolving thing. That this type of game is still just as engaging as ever. That it’s growing in ways that never would have been possible, even if it’s in ways that many didn’t quite expect. That even the classic idea of what makes an MMO can be shifted around a bit.

I play multiple games precisely because they are all different, even if they strike similar notes. I love having these worlds and characters available to me. Choices are good, and variety is good, and the fact that I can glom on to characters in unique universes and multiple stories and paths and encounters is REALLY good. I adore the way things are right now, and hope that I will continue.

2 thoughts on “Multiple MMO’ing is Okay”