I don’t pretend to be very good at PvP. When it comes to dungeons or certain raids, I’ll become the linchpin or try like hell to refine my combat skills, but PvP has always completely eluded me. Rotations that I otherwise would have down complete are suddenly lost to me, and I turn in to a jittery mess.

So that’s why it’s such an amazing thing to me that Atlas Reactor has not only cleansed me a bit of those nerves, but also has made me actually want to engage in PvP.

Just in case you’re not familiar, Atlas Reactor is the new turn-based team tactical arena from Trion Worlds. It was brilliantly described by Larry as “an arena shooter mixed with chess” and my colleague Nick as unlike anything out there, both of which accurately describe the game. It’s a PvP game where head games and forethought drive the action, not stats and rotations.

That’s probably one of the first reasons why Atlas Reactor has become a PvP staple for me. Even though 20 seconds to make a decision doesn’t sound like a lot of time, it does give you just enough to rub your chin and consider things. It’s infinitely more cerebral than most PvP MMO combat, and significantly more so than FPS games. 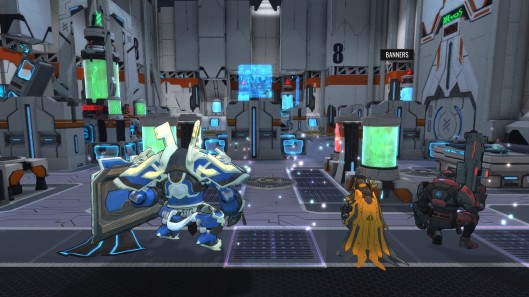 An open map, a world of potential.

Beyond the hipster-sounding praise, though, Atlas Reactor has made me reconsider my position on PvP overall. It’s made me more appreciative of the human animal and the challenges they bring to digital conflict.

In the past, I’ve been reasonably comfortable with the idea that PvE cooperation ran no deeper than the time allotted together in an instanced encounter. It’s not perfect, but it is what it is. PvP, on the other hand, seemed like an invitation to bite every outstretched hand. Atlas Reactor has showed me both the cleverness of my opponents and of my team. People who are willing to form up sight unseen and adapt for that most elusive of thrills: the W against other humans.

Now that’s not to say things were a barrel of rainbow kittens. When things go well, the dissolution of the team is just as ambivalent as any PvE encounter. When things go poorly, well…

Not only has PvP in Atlas Reactor been an exercise in enlightening human behaviors, but it’s also been a significantly more rewarding experience in gameplay.

Part of that is due to the title’s insistence in rewarding you whether you win or lose. There are myriad ways you can level up and earn a sense of progress on top of the thrill of victory, and the best part is that none of these progression systems really futz with the game’s balance. There are Mods which apply certain affects to your skills, and I’m sure there’s a greater meta already building around those Mods, but for the most part the progress you earn is completely personal.

But beyond all those bars filling up, I’m being treated to a sense of satisfaction that has engaged my senses on a level that getting a shiny new sword has never really equaled. Even the painful-to-acquire equipment of Final Fantasy XI – a personal ultimate example of MMO achievement – just doesn’t quite measure up. Lining up a series of moves or seeing a strategy fall in to place is enthralling. Even seeing your opponent pull a surprise is awesome, even if it can be frustrating. 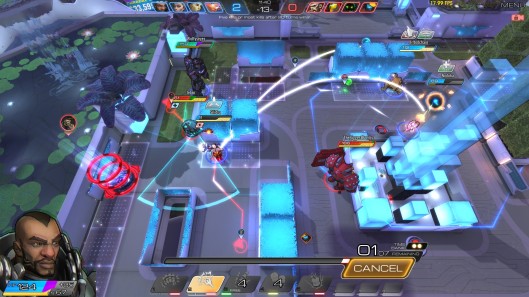 It looks like a jumbled football coach’s clipboard, but what you see is a win forming.

Finally, Atlas Reactor has shown me that PvP can be fun. It’s tactical while not being snail paced. It’s got character and style. It’s drawn in some of the most clever folks I’ve ever seen and made it all generally an upbeat affair.

In fact, it’s made me so curious about this type of gameplay that I’m broadening my MMO horizons a bit. Maybe PvP in WildStar will become an activity I engage in more. Maybe I’ll back Crowfall. Maybe someday I’ll even actually play matches that don’t involve bots in Overwatch.

With a win rate like that, I’m just asking for trouble.

Despite still being clinically awful and still not completely grasping everything Atlas Reactor is throwing at me, I’m still having fun. Part of that fun is seeing what others will do. Another is learning from my ass beatings. Another is just enjoying PuP.

Atlas Reactor has been a true game changer for me. It’s opened up my eyes to new possibilities of multiplayer gaming and changed my mind just a little bit about PvP. Chat villainy and EVE-level backstabbing be damned, PvP is actually becoming something I want to try out now, and I have the entry drug of Atlas Reactor to thank.

…right at an age where my reaction time is starting to wane. Awesome.

2 thoughts on “How Atlas Reactor Made Me Like PvP”