I wrote this before, but when I did Dauntless was in closed beta and Monster Hunter World just had their try-before-you-buy “open beta.” Now that MHW has been released on console for a while now and Dauntless is in an open beta, and since I’ve logged plenty of hours into both, I figure now was as good a time as any to revisit this little comparison and see if my initial instincts were right.

Oh, and for the record, though Dauntless calls itself open beta, it’s doing progressive updates and is asking money for a cash shop. That’s a launch product; you don’t get to ask for money and also say you’re still in testing.

I’ll start with Dauntless, a game in which I’ve reached just about the highest echelon of equipment power I can get. Honestly, the entire journey from start to near-cap has been a delight. It really is the best of the basic monster hunting gameplay formula, with the sense of visual progression you get when you unlock new gear and hunts and personal progression when you figure out how to effectively use a weapon and study a monster so much that they become farmable.

What’s great about Dauntless to me is that it’s pretty low-impact. The monsters are tough, but they’re fair. I don’t often feel like I’m losing to too many cheap tactics, though some of the higher-level critters can do some things that just feel cheesy. Still, though, most of the time when I screw up I recognize it’s my fault.

Does that make this game easier than Monster Hunter World? A bit, yeah, but that’s not a slight against Dauntless. On the contrary, I find that to be a strength. In a genre that’s just better with as many people playing as possible, having a pretty low barrier of entry is the best. 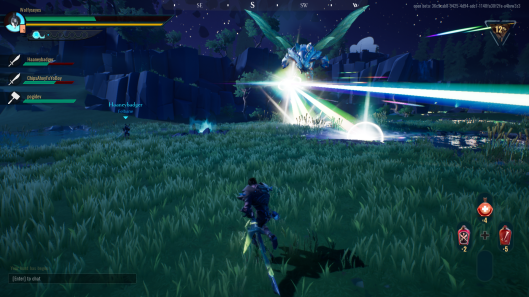 Going up against a laser insect is not something one does by their lonesome, usually.

On the subject of playing with others, everything about team formation in Dauntless is just flawless. All you have to do is choose a hunt, click a giant start button, and wait for your waiting lobby to fill with three others. Couldn’t be simpler.

Monster Hunter World, by comparison, has you hope that other people in your online session see that you’ve posted a quest and decide to head to the board to join you. Matchmaking isn’t quite as automatic, which also means hunting with others is dependent on the whims of the playerbase at large and your own progression.

I should also mention that if you’re in a hunt by yourself and find yourself in trouble, you can shoot off an SOS Flare in Monster Hunter World and call for others to join in. That, once again, is dependent on whether people will actually respond and isn’t a guarantee. In Dauntless, everyone arrives at the same time and if you get into trouble, you do so together.

And believe me, a horse that can burst into flames can cause trouble.

So does that mean I hate Monster Hunter World? Hell no. That game absolutely has its place in my heart and admittedly that was a guarantee from the very start. I’ve not played many Monster Hunter games or gotten terribly far in them, but when I have played them they were every bit as addictive and engaging.

Compared to other series entries, then, World excels in every way. The maps are better, the graphics are better, the weapons are better, and the hunts are better. Some probably would take difference to that last part considering there’s not as many monsters in World as there are in other titles, but the last few updates have introduced some engaging-looking hunts.

Now bear in mind I say “engaging-looking.” I have to mention that I’m only Hunter Rank 14. Yes, I have to qualify that with an “only” because most people who play this game have already burned their way well beyond me to the point that I could only arrange hunts with others through outside means or some level of interplanetary alignment. Which goes back around to the whole matchmaking issues I have with World.

Honestly, when you come from the effortless Dauntless lobby to the restrictive MHW setup, the difference are just as jarring as the level of skill between myself and the majority of players.

The only way I can get a team of four in an image is to use keyart.

With that all said, there’s just something about Monster Hunter World that kept me coming back and has hooked me in to playing the game on PC as well as on my PS4. The amount of time and care the devs have in building this game and its gameplay is too clear to ignore.

Beyond that, though, there are a couple of things where World shines over Dauntless. For one, the game’s areas feel far more alive than they ever have been, with an ecosystem interplay that just wasn’t there in previous entries in the series and that just isn’t there in Dauntless now.

There’s also the very minor touch of the Scoutflies, these little glowy green things that alert you to harvestable items in the map or tracks and other indications that some quarry is nearby. You actually feel like you’re on a hunt, where in Dauntless you just sort of roam around the map until you find the battle arena part of the floating island your selected critter is stomping about on. 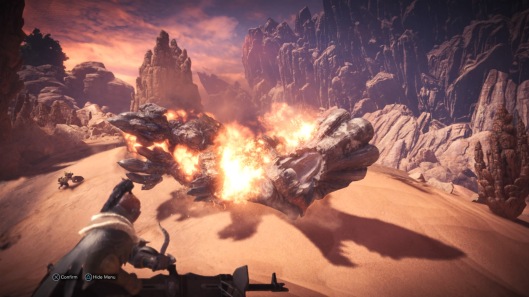 Unloading hell on this thing took a bit of doing, but was ultimately worth it.

Finally, Monster Hunter World is just updating itself far more frequently. I suspect the folks at Phoenix Labs appreciate how voracious the monster hunting playerbase can be, and I get the impression they were taken by surprise and just didn’t have enough content ready to go. Monster Hunter World, meanwhile, has had something new every single month to keep people occupied.

I’d be remiss, however, if I didn’t bring up the fact that Dauntless is looking to break up its content updates into smaller pieces in order to have a regular update pace, so ideally that will be sufficient enough. In that regard, time will tell.

So, where does that leave me with regard to these games? Honestly, about the same way I felt to begin with when I last wrote about this topic. They both have a place in my gaming diet; they each have their own strengths and weaknesses; and they both offer just enough variance in the kind of hunting experiences they provide to make each stand out on their own to me.

Basically, you can’t make me choose. So I’m not. I love ’em both. What I’m saying is I’m a loud and proud monster slayin’ slut. 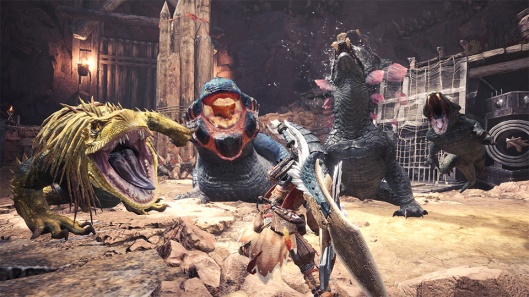 And I enjoy foursomes.