So there’s this rap song made by this kid who is very, very clearly a fan of Fortnite Battle Royale. It crossed my Twitter feed a week or so ago and it took me just about as long to process, as this young boy was trying to turn his ability to play a shooter well into several bars’ worth of lyrics about their own superiority.

At first blush, it sounds a lot like 2018’s answer to the Numa Numa Dance. But after some introspection, I’ve concluded that the problem isn’t him, but me. Its reinforced something of a lesson about how some games or genres are beyond my comprehension and that’s okay.

Who knew this little dude would pack so many mental exercises into two-and-a-half minutes?

Here’s the thing, friends. I don’t like battle royale. For one, it’s perceptually soaked the multiplayer gaming space to the point of exhaustion in a very short time. For two, it personally represents to me a game type that’s the worst of the game industry – a game where very little design effort is needed but is ripe for hyper-exploitative monetization schemes.

Regardless of what seems like an obvious truth, however, people still adore these friggin’ things. So, naturally, I tried to puzzle out why. Short of playing battle royale games personally, I watched several streams and videos of both PUBG and Fortnite BR to attempt to mentally bridge the gap between my opinion of the game type and others’ enjoyment.

It still wasn’t working. And, after some thought, I pretty much reasoned that my bias was just too strong to ignore. Particularly in the case of Fortnite, the game that Battle Royale sprang off of and looks significantly more interesting, but gets what appears to be the barest minimum of development attention.

“Let’s ignore all of this neat stuff and simply use it to build bullet shields!”

I was, to a point, okay with that conclusion. But then this kid starts fumbling through this awkward-sounding rap song and the assumed peace I had made between myself and battle royale disintegrated.

But why? Why is it I have to worry so damn much about what others find enjoyable? Is it because my job has instilled this weird compulsion to report on everything these games do? Is it resentment related to that? Does it run deeper than that? Do folks like these represent some sort of illness in gaming? I don’t understand!

…and there was the answer. I didn’t understand. And, frankly, I don’t have to.

Screenshot representation of me taking a closer look at myself.

As humans, we generally want to belong. There’s this inherent desire to be accepted into a tribe. It’s been used as a weapon by brands and especially by game companies for the longest time. And when we don’t feel like we’re part of a tribe or we feel like something else is so radically different from what was originally “normal”, we get angry because we don’t understand.

All of my impotent annoyance. All of my aggravation. My views, my opinions, my grumpiness of the battle royale genre….it spawned from being unable to understand and my anger that I couldn’t build that understanding. But you know what? That’s okay. I don’t have to force understanding of something because I’ve got other things I can enjoy.

People love Fortnite Battle Royale so damned much that they’re willing to write, produce, film, edit and release an entire music video about the game. If that’s not the sum total of a fan reveling in their enjoyment, I’m hard-pressed to know what is. This video isn’t a cringe factory. It’s concentrated delight. 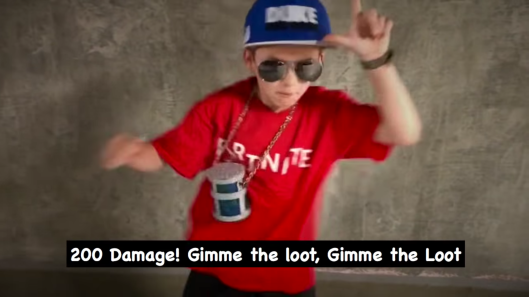 There are enough divisions between us that we don’t need to “gamify” it with creating vile factions between players of different genres or games within those genres or gaming platforms. If anything, the amount of cross-platform play for Fortnite Battle Royale is a perfect illustration of how these barriers are artificially installed and that removing them makes gaming that much better.

And besides, battle royale as a sub-genre is no different than the MOBA craze before it, or the Call of Duty clones before that or the WoW clones before that. Hell, I can even remember a time when it seemed like every studio was trying to make a mascot platforming title.

One of the best things about watching video gaming is that it evolves. And often, it does so in ways that are wholly unexpected. Sometimes, those directions aren’t what one would personally like, but at the same time that’s nothing personal. You’re not the shunned minority you think you are, you’re just not the intended audience. And that’s fine. There’s other places you can be. Embrace those.

So thanks, Fortnite Kid, for reminding me that I don’t need to be included and that forcing the issue is just needless aggravation. You keep doing your thing.

3 thoughts on “The Acceptance of Not Understanding”