Of course I was going to write about this story. Even though I’ve seen the writing on the wall for this game a long time ago, it doesn’t make ultimately saying goodbye to WildStar not suck. Just suck a little bit less, as I’d made my peace with the matter a while ago.

Still, I’d be remiss if I didn’t provide a few final words regarding what was one of my favorite flawed MMO gaming experiences. 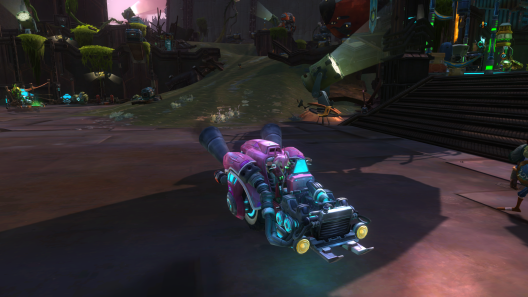 And this bright pink bastard in particular.

I’m not going to dwell too much on why WildStar ultimately died. There will be more than enough people who will cross that road and likely do so better than I will. And while I certainly have my opinions on what helped, I’m going to focus on that color.

Not the color pink, mind you. But the unabashed use of it. Of all sorts of bright colors. WildStar was a loud and proud piece of visual style, unwilling to bow to the grimdark hyper-realistic pastiche that some people interpret as seriousness instead of boring. The color palate literally was the best way to describe this game and it’s really what drew me in.

Color wasn’t just visual the more I dug in. There was color in the characters, too. Many of the NPCs were bursting with a sort of vibrancy that comes from the large personalities that one has to create with such ostentatious designs and screaming colors. These were big archetypes.

Anyone who’s met the Caretaker knows that this smile was way more than just a smile.

Color, too, permeated the music of the game. Jeff Kurtenacker put together one of the single most diverse soundtracks I have ever heard in video games entirely let alone in an MMO, bouncing from spaghetti western to classic sci-fi to weighty orchestral moments. Somehow, though, all of these styles weren’t clashing for attention. They were woven into a single spectrum. Individual wavelengths of colorful sound that, together, created a beam of audio light.

Then, there’s the color of animation in WildStar. The fluidity of movement from the merest, most basic emote to the biggest attacks. Combat in WildStar hit that perfect middle ground between TERA’s tight form of action combat and DC Universe Online’s engine grease levels of slippery motion. Movements had purpose and life and vibrancy that matched all of the colors I described before.

Finally, the colors of the storytelling. I am hopelessly in love with the lore and setting of WildStar. It’s flavor was just as peppy as everything else that greeted my eyes and ears, unfolding in such a way that I was completely engaged. Even the most basic things like the cartoonish levels of steampunk-like tech felt just as rich as the tale of Nexus, Drusera and the Entity. Mixtures of rust color and bright lasers with the dark purple of virulent doom and the piercing yellow light of hope.

Dichotomy in color. Which, for those who know the story, totally get the visual symbolism.

This kaleidoscope of color helped me paint some of my favorite roleplay characters, too. Being embroiled in bright hues and personalities forced me to think of characters that would be just as vibrant and explosive and impactful. I got to write cartoon characters, which is something I never did before in RP from the other MMOs I’ve played before or since.

It brought to life my neon pink Aurin, Kael Dashwind; a bouncy and hyper nurse who refused to let himself rest, managing to create fast-deploying salves that would shoot from his guns for immediate field triage. A hug-obsessed mad scientist who saw the potential of the Phage but ultimately used his hyperspeeding brain for the greater good.

It brought to life Alterra Foecleaver; a Draken woman who defied the more feral assumptions of her race. A self-described explorer, archeologist and vlogger. A woman who loved to get into trouble, claw her way out of it, and film the whole endeavor for views on her holo-vid channel. 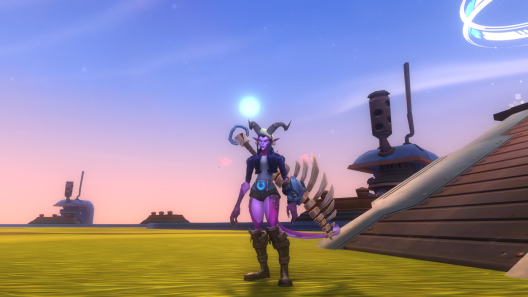 If the Tomb Raider was a dragon lady, used a big-ass sword and liked to be on YouTube.

But despite all of these soon to darken colors, I’m going to also carry them with me. They’ve painted me in a variety of ways. As a writer and roleplayer of characters. As a game player. As a person who follows MMOs both for leisure and work.

So, thanks to the artists who have painted the complete composition that was WildStar. I hope you can spread those colors to many, many other games.

4 thoughts on “The Colors of Nexus”