I haven’t booted up Destiny 2 since Curse of Osiris launched. Generally speaking, I’m the kind of guy who just goes to another game if the one he’s playing disappoints, so that’s been my solution to the problem. That said, I’ve certainly been eyeballing the uproar with the playerbase and its view of Destiny 2, so I’ve been waiting along with many to see what Bungie would respond with.

On Friday, they finally did, and I wanted to share my own thoughts on the matter as a more casual player of Destiny 2. 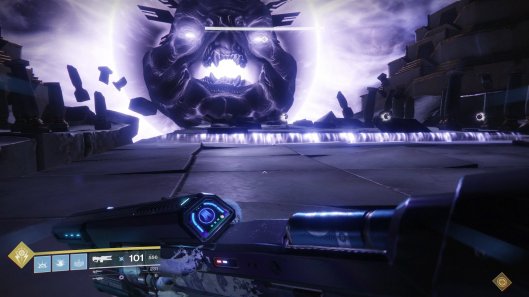 END_OF_DOCUMENT_TOKEN_TO_BE_REPLACED

In the circles I shuffle around in, Destiny’s mere existence seems to tick off people.  There have been no shortage of disparate remarks regarding the game’s marketing budget, the fact it’s on consoles first, it’s a shooter, it’s only got team sizes of three to six…you’d think that Bungie went around in every supermarket in America and pissed in all the corn flakes boxes.

Perhaps due to a mixture of civil disobedience against the raging commentariat and due to my own curiosity and want to try new stuff, I decided to buy in to the game.  Having read up on the thing and seen some gameplay videos, it seemed to me that it’d be a similar take on a Borderlands-style MMOFPS.  At worst, it’d be a waste of $60 I would have used to buy copious amounts of Baconators.  At best, it’d be a nice little time killer–something I just poke around in for a couple of hours because shooting aliens is just fun.

What follows here is a quick recounting of one of my play sessions in Destiny, as well as some of my thoughts.  I should first start off by saying that things are only just beginning for me in this game, since I’m just level 3 as of the start of this post’s account.  With that in mind, the game does strike me exactly the way I expected, with a couple of niggling issues. 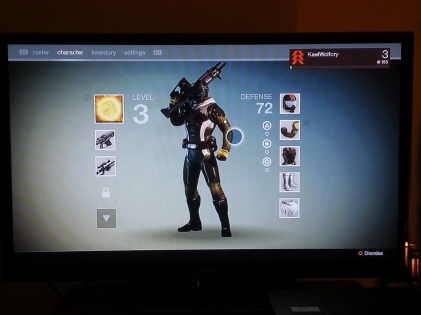 One of the very first squawking noises made from “deh haturz” is that the game is a lobby shooter–that all it is is just one individual location that others can join in with you before loading in to a set piece.  This isn’t entirely off of the mark, but I also don’t really see that as a problem.  Considering the fact that the options available to you from your low orbit are the same as you can access from the field, it was just a matter of going to the map, selecting my destination, then flying in.  To me, that felt a little more like a loading screen than a lobby considering that doing these things took all of maybe 10-20 seconds.

Whatever you wanna call it, this is still damned pretty.

Another complaint is that the game has you completely alone in private instances with no contact from other players.  This is complete fallacy.  The area I was touching down on, Old Russia on Earth, is a shared playspace, with several other players phasing in as I went towards my objective.  As a matter of fact, while I was tromping up the hill to shoot alien face, a public event went off, and myself and another two players charged over to help out.

The public event in question is a standard sort of thing–staying in an area to defend it from waves.  The FPS gameplay made it more engaging, as we had to find cover or flank enemies while also avoiding fire from the dropship unloading baddies on our heads for the set time limit.  The rewards for doing so weren’t exactly mind-blowing, save for some XP and a couple of random dropped items, but it was nice to be able to dart away from the objective regardless.

After the event clear, I headed back on to the path towards my objective, which lead me into a series of really dark rooms that were coated with some random…smoky dark stuff.  The one thing I will laud about this game is that the places you’re taken in to for firefights are damned pretty, even on a PS3. 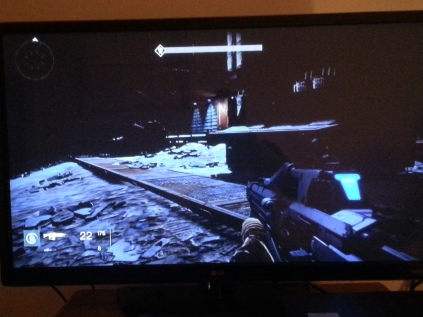 …you’re just going to have to take my word on this.

One of my initial impressions were that the enemies weren’t exactly displaying Rhodes scholar levels of intelligence.  I’m told that later levels see things amp up, but this mission introduced me to my first mixed engagements of ranged and melee baddies…and they also displayed some pretty competent tactics, as the melee’s flanked me and forced me to withdraw into a bottleneck so I could handle them individually.  Meanwhile, the named boss-like enemy I had to take out continued to retreat, sending more aliens to try and impede my progress.

The whole “boss that spawns additional enemies = challenge” thing is never a design decision I find terribly clever, and this one got my eyes rolling all the same.  Still, I had fun, and when I was able to close the distance (and blast through the target’s shield) I was victorious.

See? Just like every other Final Fantasy I’ve played, there’s a “You Won!”-style screen!

After this mission I was told to head back to The Tower, which is the primary hub/social region for all players, which brings me to another complaint–the hub city is also a lobby and nobody will ever talk to you.  Or, everyone will be talking because everyone is going to be mic’d up and it’ll be an assault of homophobic racist console-kiddie banter.

Since the game does rely on provided voice chat as the primary source of contact instead of a chat box, you’d perhaps be forgiven for the second assumption.  Instead, that’s not the case.  The first holds more truth, since everyone’s darting about doing their own thing without completely acknowledging each other.  The difference, to me at least, is that this is not unlike every other hub city experience I’ve had in every MMO I’ve played.  The lack of a scrolling chatbox full of /shouting idiocy doesn’t excuse that truth.  These hubs are just like every capitol city in an MMO I’ve been in.

After the turn-in and subsequent new shiny armor reward, I decided to fly in for one more run-n-gun.  This time I was to track down some signal of some sort because blah blah blah Peter Dinklage droned at me.  That is one complaint that is absolutely right–Peter Dinklage’s performance as your accompanying AI, Ghost, is absolutely toothless.  It’s so phoned in you’d think he had lost a bet.  Whether he was given poor direction or the amount of fucks lessened with each zero added to his check is irrelevant.  As the chief voice giving you updates on the situation as well as lore on the game, he needed to perk it up and just failed to.

“Blah blah blurgh need to find out what they’re looking for…ugh, am I done yet?”

Shortly after arrival on Old Russia again, there was another public event, this time of the “Mass multiple people to kill an over-healthed big bad because that’s totes heroic, u gaiz”.  The event actually was rather long, and the enemy in question was kiting all four of us around to a fairly long stretch of the region. It was becoming close, as I was running out of ammo, right until one among our number had the bright idea to hop aboard his Sparrow mount and gun him into pieces.

It, sadly, took all of us an embarrassingly long time to think that one up.

After I followed Yawny the Bored Robot to two different scanning points, we tracked down the signal to a large warehouse.  As Ghost scanned the computer to source the signal, waves of enemies came pouring in.  This was one of the more intense firefights, as it mixed up melee, ranged, several lieutenant-style enemies and some stealthed baddies into the mix.  I had died on a couple of occasions, which was annoying as I had to spawn back to the checkpoint and face off again.  When I did succeed, though, it was a great feeling.  The firefight, the challenge, and especially the music all combined into a sublime little pile of combat.

Overall, this game has been a solid buy for me.  It’s not something I’d want to play for spans of longer than a couple of hours, but for those couple hours there is a very solid piece of FPS gaming going on here.  The fact that I’m a Hunter role doesn’t really seem to make a huge amount of difference except the fact that I can throw fire grenades….most of the time throwing them at myself….but the tree of abilities leads me to think that things will become very interesting very soon.  Shooting with a controller will always feel like I’m operating a motorized wheelchair with a turret sitting on top of it, but gunplay is tight and things are starting to come together.

As an aside, I want to thank the Couch Podtatoes podcast for their spotlight on my blog.  I’m honored to have gotten a nod and also glad that one of my posts incited some conversation and thought.  Though I will have to wonder exactly why they wrote me as a woman on their show’s site.