So that whole EverQuest Next thing.

Yeap, it sucks. Put a huge hit on confidence of the MMO genre and absolutely affirmed that MMO design and MMO business are so divergent from each other that they might as well be on separate planets. Of course, it also gave people a LOT of reasons to start snarling at The Big Companies for Crushing Dreams and Making Things Awful.

More directly, though, it put Landmark squarely in to the crosshairs of a huge load of bile. And I think that’s kind of unfair.

People always hate on the pretty ones…

END_OF_DOCUMENT_TOKEN_TO_BE_REPLACED

I was a latecomer to the anime scene, entering the fandom through channels that probably make me not a diehard.  Never did understand how being a fan of a thing required you to go through some sort of idiotic attunement process to be taken seriously…but anyways.  I discovered anime through the Saturday Anime programming block that ran back when the Scifi Channel was actually spelled properly.  The first feature I saw was Project: A-ko.

It was probably one of the craziest and most hilarious things I had ever witnessed, and before then I watched a LOT of Saturday morning cartoons while growing up…so I had seen some shit, man.

But I never saw anything like this.  I never saw something that was both so fluid and so madcap.  It broke model but kept proportions that made sense in its world and its style.  It was action-packed and a bit lecherous but still just off-the-wall enough that I never really took it as being intentionally awful.  The whole setup was just nuts, but I enjoyed every second of the ride.  It was my first, and I was immediately hooked.

From there on, I kept to the Saturday Anime to get my dose because I didn’t have any idea how to find this stuff any other way.  A-ko moved to Vampire Hunter D.  Then to Akira.  Then Venus Wars.  Then Robot Carnival.  I was thrust in to a variety of genres and worlds and stories that moved and played like nothing I had ever witnessed.  Disney was the only animated movie I knew at the time…but here were robust, intense and fully realized cinematic experiences that were more than an animated musical.

I thought Disney had the lockdown on imagination. I was wrong.

Afterwards, the internet revealed to me an entire group of folks who felt the same way, and I was opened up to stories and series and movies and so many things.  I watched the old standbys like Dragon Ball and Gundam and Cowboy Bebop, but I also found things like Appleseed and Dominion: Tank Police.  Stuff that I felt maybe flew under the radar but were just as good as things that made their way to the U.S. broadcast.

And then, after years of watching series and movies and other things, I stumbled in to the show Clannad: After Story.  In specific, the episode “White Darkness”.

This episode really affected me in ways that I’m not sure I can properly put in to words.  I couldn’t even stand to watch the rest of the show after having experienced that because…I mean, dude!   DUDE!  It plucked a nerve in me that I really didn’t want to have plucked, and I don’t care how much was remaining because…DUDE! 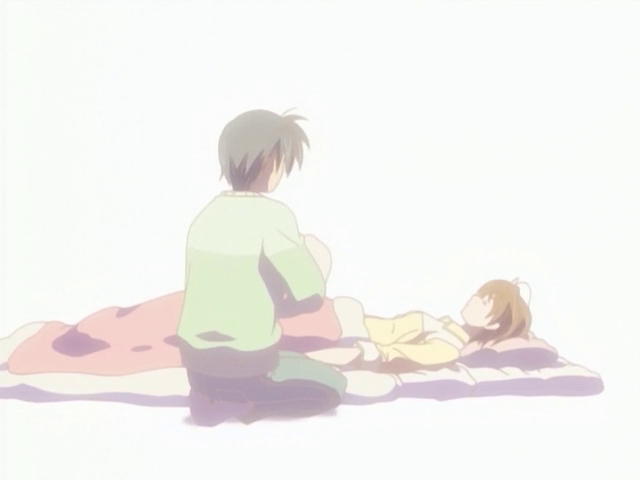 After having witnessed that, I decided to dial back the dose.  I was finding things less and less appealing about anime, and hearing about series that were coming along didn’t re-ignite my interest.  And then I found the show Berserk and WHAT THE FUCK IS WRONG WITH YOU, JAPAN?!

I mean, I get that the show’s world was not a nice place to be in, but by the time I finished the series I felt like I had been through an emotional wood chipper.  Everything about that show and the resolution and the characters just made me want to bathe in molten lead.  I felt gross for having forced myself to suffer through the whole thing.

It was the series that killed anime for me entirely.  I was done.  No more.

Nope, I’m not including caps from that show. Here’s a puppy instead.

From what I can figure, I’ve made the right decision.  Attack on Titan looks insipid and just about as awful as Berserk, and things like Madoka Magica just reaffirmed the move away from anime.  The last series I had watched that could be perhaps considered recent is Spice and Wolf.

I suppose, then, I’m just not the audience anymore.  I guess there aren’t any more anime out there that I really find compelling or stories that don’t really want to be involved in any more.  I mean, maybe there are series out there that I want to be a part of now or in the future, but…the thrill has truly gone.  I’ve been ruined by anime that decided to empty a bazooka in to my heart.

“I’m going to eat your soul through your genitals!”

The whole thing is still a bit sad to me, though, despite feeling like I’ve washed my hands of it all.  Perhaps I haven’t really cleaned off anime, then, because I am a bit upset that I can’t find enjoyment in the format.  I still go back to old series and old movies, but I still can’t shake the feeling that I’m missing something.  That maybe there’s more to the genre now than bait-and-switch horror nonsense or mindlessly indulgent violence.

Or maybe I just grew up.

So I suppose, ultimately, I fall to anyone who may be reading this to set me back on the track of re-finding a fandom.  I had opteed in for a 30-day trial to Crunchyroll pretty recently, and I am pretty much overwhelmed for choices with practically no clue where to really start.

So maybe I should seek suggestion.  Maybe I should just start randomly clicking at crap until I find things that strike.  Or maybe I should just truly give up and face the fact that anime is no longer meant for me.  It has died, and that can be fine.  Still, I can’t shake the feeling that a part of me died along with it.  And that’s not really a great sensation.