WARNING: The following blog post will feature copious amounts of spoilers for the game.  If you haven’t completed this game, stop reading now!

Final Fantasy XIV, as I had stated in a blog posting a while back, has always been an odd bird for me.  It’s a game that pretty much has followed that old themepark formula yet still manages to captivate at the same time.  It’s hardly the perfect game, but it has more than enough things going for it to make it a net positive experience for me.  And so, naturally, I was incredibly eager to play the coming expansion, which not only opened up all of the usual stuff an MMO expansion should, but included my all-time favorite class from Final Fantasy XI, the Dark Knight.

After having gone through the new expansion’s worth of leveling content and a bit of the endgame, I can gladly report that the money I had spent on the collector’s edition is definitely not wasted….with, however, a few caveats.

Let’s get the early stuff outta the way–the new areas of the game are top notch overall.  The city of Ishgard is a vibrant pastiche of gothic architecture and humble towns, with the grandeur if the upper crust literally piled on top of the desolation and unkempt feeling of the commoner’s areas below.  The areas outside and around the main city are all vibrant and unique, running from snow-coated rocky wastes to mystical floating islands to the final region of Azys Lla, an enormous Allagan construct of disturbing high tech.  It all feels like a Final Fantasy title should in terms of its vistas.

The new DirectX 11 upgrade to the graphics has, largely, made it a whole new game in terms of visuals, a change that has been obvious even to myself and my middling machine.  Everything just looks sharper overall.

You can almost hear the Final Fantasy theme, can’t you?

The content of this expansion is the normal thing one should expect of an expansion, like I said–new level cap, new gear, new side quests and Main Scenario quests.  The entire leveling experience was charming ultimately, with a couple of snares to progression that were easily circumvented by doing alternative content such as dungeon finder stuff.  It wasn’t the smoothest of leveling curves, but a significant improvement to 2.0’s progression, in my view.

The storyline of the new Main Scenario was satisfying for the most part.  The ending of 2.4’s story, Before the Fall, left some exciting plot points dangling and some questions remaining, and overall those were sealed up nicely while leaving new cliffhangers to look forward to.  There were some missteps, though.  For example, I was rather hoping that the death of Nanamo Ul Namo and its incredible ramifications would be a long-lasting event.  Unfortunately, the entire damn thing happened precisely the way I didn’t want it to–her poisoning was revealed as a ruse, and the Monetarists plot to take over without ultimately deposing the Sultanate was slapped on.  It was the laziest solution to the plot point, and every second of rage and emotion and reckoning I had hoped the characters would experience was completely wiped away.

Additionally, the return of Y’shtola to the Scions was similarly annoying in its expectedness.  Still, her return was not quite as jarringly done, making drawing her from the Lifestream one of those narrative moments that still stick with me.  It also, though, means that the sacrifice of the other Scions will be washed off and waved away as well, including Minfilia’s utterly useless ass.  Sometimes the dead should stay dead, even if this game takes place in a comic book-y sort of world.  At the very least, though, one of my favorite Scions is back and even cooler than before…and Kan-E-Senna was shown as being an actual magical powerhouse as opposed to an assumed one. 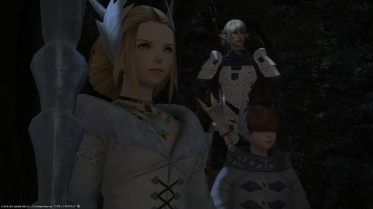 The climax of the storyline was easily the best part.  The machinations of Ishgard, the fight against the Ascians and their subsequent betrayal, Ysale’s sacrifice, the final fight–ESPECIALLY the final fight–all wound up and made for one of the best closings to the storyline of the expansion.  Everything felt epic and empowering and closed the chapter wonderfully.  Best of all, it neatly left things open for further stories to be told, as the Ascians still have weapons at their disposal and the reformation of Ishgard still could possibly make a play in further content patches…let alone whatever else will be revealed for the Scions and the story of Ul’dah not being completely shut.

Overall the story did what it was meant to.  It weaved a great Final Fantasy storyline while leaving me wanting more.  I can’t wait for those patches to come down the pipe and follow the new Main Scenario quests.  I also will take every opportunity to re-live that final battle if anyone in my Free Company require it.  Seriously.  Incredibly epic. 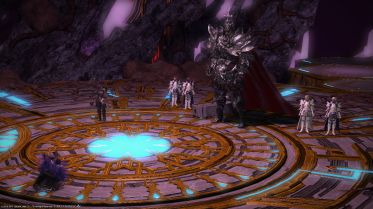 This dude’s ass deserves so many kickings.

The new jobs are all fun looking, but all I can really speak to is the Dark Knight job, a new tanking class that meshes the neatest parts of being a Paladin and a Warrior with some of the coolest thematics yet.  The job’s storyline really captivated me, and the abilities had a great feel to them.  There are a couple of pointless abilities that could use some re-tooling, but the job really manages to fill its own niche without dominating the other two tanks.  It makes itself stand alongside the other tank jobs.

From what I was able to see in my group content actions, the Astrologian has also found itself alongside the other healing classes, and it’s actually the first healer job that I think I’ve ever wanted to play.  Whether I will or not, of course, will remain to be seen…but the pull of the job’s mechanics is strong enough that I actually want to run an alt, which is a scary proposition for this game in my view.

The same, arguably, hasn’t been said of the Machinist class, which from second-hand reports is performing poorly.  The aspects of the job that made it sound neat on paper are barely used in group content, meaning the damage output is below what’s needed and provided by other classes already in the game.  This is fixable with new patches, of course, but the timing of said patches means that people who were looking forward to this new job are going to have to wait and very likely will fall behind the endgame curve. 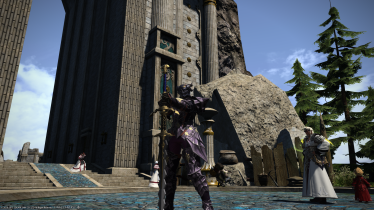 Before I move on, though, let’s bask in the Dark Knightedness….mmh…glorious.

And that segues neatly into the bad…namely, the endgame.  As usual, the endgame is all about grinds for Tomes to get top-flight gear, which means you get to experience the other new raid stuff that’s in the game, as well as be ready for the stuff that will be patched in as the months wear forward.  Hardly expected, right?  However, precisely like they did in 2.0, the dungeons that are at level cap to get the types of Tomes you need number precisely….two.  This is precisely the sort of thing that burned me out on the game in 2.0 and made me ragequit for about seven or eight months.

Obviously more will be patched in later.  Obviously the earnings for items will become smoother as new content and new gear tiers are added.  Obviously this will be a non-issue within about three or six months’ time.  However, that does not excuse how things stand now.  As a tanking player, I am now outclassed by people who have more free time than I do and am barely able to manage threat.  Many people who would want to play Machinist are likely going to be even more in the cold as a result of this design decision.  And what infuriates the most about the matter is the solutions are there in front of their faces–have more dungeons that are relevant at 60.  Smooth down the wall of Tomes earnings.  Hell, even adjust the Duty Finder to link people of near Item Level together so as there’s less of a gap disparity.

They refused to do that.  They refused and they made literally the same mistake twice…and while it’s not a dealbreaker for me completely, it is still a very large splash of cold water on what is otherwise a very enthusiastic and excellent MMO expansion.

Wanna experience neat stuff? Too bad! Pump up them numbers.

With that said, I will continue to rage against the machine and meta, doing things at my own pace and finding enjoyment both in playing a wonderful class, roleplaying with a wonderful community and experiencing the no-doubt awesome things to come down the pipe for future patches.  It ain’t perfect, but it most definitely is the perfect Final Fantasy expansion, and it still makes me log in despite the design flaws.  Likely because we know that things will be improved.  They have before, they will again.  The cadence of updates this game receives makes other MMO fans jealous, and for good reason.

I’ll forever love the realm of Eorzea and the character I’ve put in the realm.  I will gleefully pay for my subscription.  And I will still do the treadmill thing, albeit begrudgingly, because like I said at the beginning, the good far outweighs the bad.  I wouldn’t trade it for anything right now.